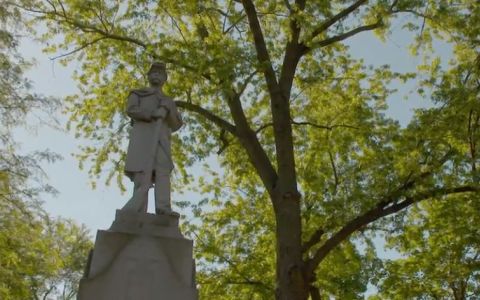 In recent years, the Confederate monument has gained a new level of symbolism, as the item at the center of an ongoing debate — one that reaches far beyond the subject of monuments — about how and whether a nation should remember the darkest moments of its past. Statues to those who fought for the Confederacy have been brought down in numerous cities by protesters or officials, while other people have fought to keep them, as reminders of a heritage they say is about more than slavery or simply as part of an undeniable history.

The reason that’s the case is explained by a segment on an upcoming episode of the PBS series 10 That Changed America, which takes host Geoffrey Baer across the U.S. for thematic looks at how what the nation has built has, in turn, built the nation. In one new episode, Baer focuses on “10 Monuments that Changed America” and the ways that monuments can be a window into the psyche of the nation that erects them.

The monument in question, in the clip shown here, is the so-called standing soldier statue, a symbolic monument to local individuals who fought in the Civil War. But it’s not just one monument. Thousands of them can be seen in towns across America, in states that fought for both sides.

As Kirk Savage, author of Standing Soldiers, Kneeling Slaves: Race, War and Monument in Nineteenth-Century America, explains in the clip, the Civil War was such an all-encompassing conflict for the nation that pretty much every town in the country would have a reason to want to have such a memorial — to the point that towns worried that not having such a statue would make them look bad. (This would have been in the decades following the war, whereas many of the more infamous monuments to Confederate leaders were built later, sometimes to speak to other moments of racial strife.) But commissioning, designing, creating and installing a monument is not so easy.

The solution: a mass-produced memorial that could be ordered from a catalog.

“With dealers and catalogs of readymade soldier figures,” Savage writes in his book, “the industry could supply soldier monuments cheaply and quickly to local communities without them even having to approach a sculptor.”

Now, more than 150 years after the war ended, those readymade statues still dot the landscape, each now made unique by its context.